Came across this photo while searching the old albums for something else. Back in the day I had the honour of sharing Night Visions 8, one of Dark Harvest’s classic series of three-author anthologies, with John Farris and Joe R Lansdale. Joe and I had met at the previous year’s Fantasycon. Our families were together on a visit to Nacogdoches and we had the idea of a group photo with all three of the Night Visions contributors.

John Farris was – is – one of my writing heroes. From his early ‘Steve Brackeen’ pulps (which I managed to track down at San Francisco’s incomparable Kayo Bookstore), to the magnificence of such titles as The Fury and Wildwood, he’s a key figure in the creation of modern everyday-world horror.

Joe agreed that the thought of having a shot the three of us together was so cool. Only problem was, John wasn’t there with us.

So we improvised. And you know what? I don’t think anyone ever noticed. 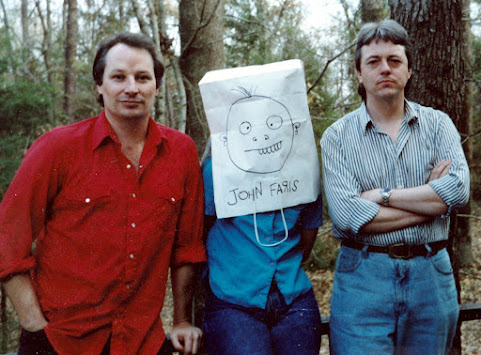