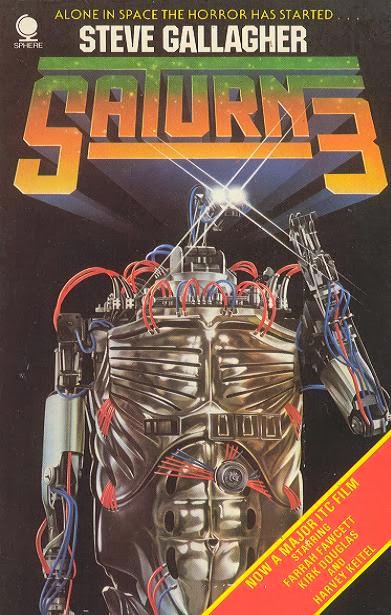 Ah, Saturn 3. While I won’t make any claims for its quality, it did play a crucial part in my early career – I novelised it during the ITV strike of 1979, and the experience was key to my going freelance a few months later. Until then I’d fitted my writing in around the day job, but this 75-day trial run persuaded me that I could both make it work and make a living. I was 25. Older me looks back in horror.

But it worked out, and the novelising gigs got me through some of the low spots. They could be good, fast money for the amount of time and effort involved. For a young writer it was hard to resist the impulse to improve on the material, to add scenes and characters and story to make ‘a proper book’. On a couple of occasions (Silver Dream Racer, Warriors’ Gate) I had my chain jerked and was told to restore my flight of literary fancy to something closer to the script.

There was a certain joy to the work, like a head-clearing run in the rain. Exercising those professional muscles, and just enjoying the exercise. I think that was a youth thing. I’d hate it now.

As well as these titles, I novelised one of my own radio serials and my two Doctor Who scripts. Regardless of the fact that the raw materials were already provided, a decent and professional job could put you on an editor’s radar; Colin Murray, who commissioned Saturn 3 for Sphere, then bought my first real novel.

My slickest gig, I reckon, was the two Kids from Fame books, based on the ’80s TV series. Twenty-six scripts arrived from MGM; the publisher’s idea was that they’d make two books of 13 chapters each, one chapter per episode. Which clearly couldn’t work because it would just be a compilation of synopses. So I split the scripts into two piles and combed through each, gathering elements for two new meta-stories. In 21 days I turned in two 50,000 word novels and picked up £4,000. They were published under the name of Lisa Todd; she got fanmail from kids in dance class, and I had to respond in character.

That was the most I ever made on a novelising job. Sometimes a deal could include a royalty – none of mine ever did, but a royalty on a tie-in with a movie hit could bring an unexpected payday. One fellow-scribe once told me how a Kevin Costner book-of-the-film paid for his house.

Are they endangered, or are novelisations actually extinct? I know that tie-ins and spinoffs still flourish, not to mention the rise of fan fiction to an industrial scale. But the script-into-book format, which was once the only way to relive and keep a souvenir of the viewing experience, was surely rendered obsolete by tape and DVD?

There’s a fansite devoted to the making and appreciation of Saturn 3. You can find it here.

People have sidled up to me at conventions bearing a copy of the book. They expect I’ll be embarrassed by it. I’m not.

Here’s something I once said on the subject, in an interview some time back:

It was just a gig, back in 1979. I was working for a TV company and the union called a strike which went on for twelve weeks. My agent came up with the job and I took it. I got a copy of the screenplay and two non-professional snapshots, one of the robot costume and one of a tunnel set. That was it. The script was terrible. I thought it was bad then but in retrospect, and with experience, I can see how truly inept it was. That may not be Amis’ fault. Years later I met someone who’d worked on the production and she told me that every script doctor in town had taken an uncredited swing at it, so it’s impossible to say whether it was stillborn or had been gangbanged to death. I did the straight piece of journeyman work I’d been hired for, turned it in, and banked the money. It’s not my book, by any definition. It’s more like a housepainting job. That’s all novelisations are.

3 responses to “Remember This?”