Among the stuff that migrated to my loft after my father died: four scrapbooks of my press cuttings, compiled by my mother in those loose-leaf photo albums, the kind with a sticky page and a transparent overlay. She kept everything. Everything that her thoughtless son remembered to pass along, anyway.

This morning I took them down to give them a dusting. The sticky’s dried out and it was all I could do to contain all those clips and snips before they made a snowstorm on the study floor.

Many of them have yellowed, and more than a few have faded. I started wondering whether I should at least consider scanning and digitising them in my Copious Spare Time; an impulse that wore off fairly quickly as I looked at the volume of stuff and the amount of pernickity effort that would be involved. Nothing here will mean much to posterity; and as a collection it can never mean as much to anyone as it meant to her.

And the scanning of ephemera… well, that’s a tricky issue. When I started research on The Kingdom of Bones I got a lot of my detail and atmosphere from old newspapers at the New Orleans public library. They’d been transferred to microfiche and the originals, I would assume, disposed of or destroyed.

The only good thing you could say about microfiche was that it was better than microfilm. Both were, at best, hit-and-miss for legibility. Now there’s high-resolution scanning with OCR recognition – too late for those pages if the originals are gone, and now we have the issue of evolving formats and digital obsolescence. I already have stuff on compressed discs that can’t be accessed by anything later than Windows 98. And at the other end of the scale, there are movies being shot in digital formats that are out of date before the edit’s completed.

Digital’s great for convenience and accessibility. But for permanence… well, ironically, it seems that ephemera has the edge. So for now it’s just close up the pages, and handle with care.

Here’s one of them. Neil Gaiman interviewing me for Time Out in March 1989. I wonder whatever became of him. 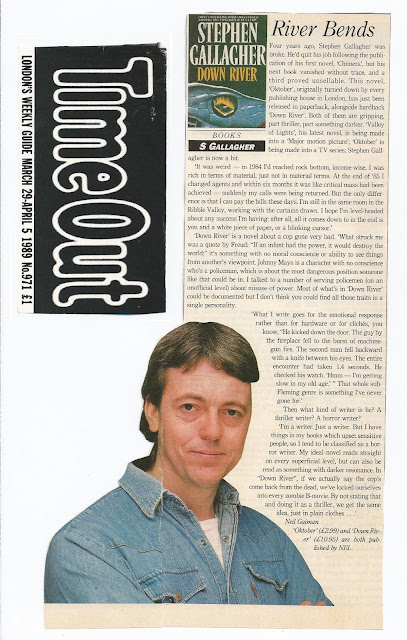 And no, my head was never actually that shape…