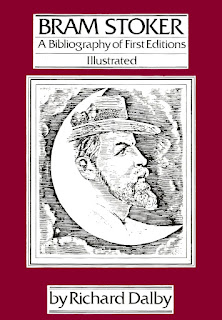 A supreme scholar, a gentle soul, and a great loss to the field and all who knew him.

We met in the ’90s when Richard invited me over to Scarborough to talk about my Stoker-inspired project (then called Victorian Gothic, it would later become The Kingdom of Bones and the first of the Sebastian Becker books).

Richard had produced the definitive Stoker bibliography and also had a wonderful selection of early editions and other material. These included a Dracula first, found in a West Country book shop for £8, and Stoker’s personal annotated copy of The Man. Richard had discovered that one in the back of a dusty bookstore and when he took it to the desk to pay, the shop’s owner thumbed through it and then knocked a couple of quid off the price “because it’s been written in”.

Richard had two houses, one to live in and one for his books; the book house was entirely that, as far as I saw, shelved like a library in every room. He kindly photocopied Stoker’s then-unobtainable Snowbound story collection for me, and later as editor picked up some of my own stuff for his anthologies.

I don’t claim we were close, and in later years we pretty much fell out of touch, but I count our meeting as one of the significant waypoints in my life.