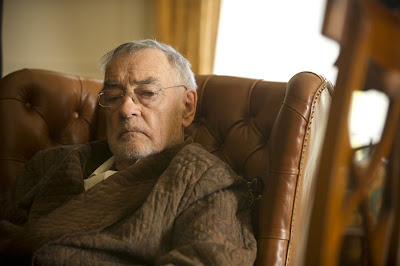 “He also has many small-screen credits to his name, in such TV series as Midsomer Murders, Waking the Dead, Silent Witness and Doc Martin, where his charismatic presence won over many viewers.”

The Silent Witness was mine, The Legacy, a two-parter that aired in 2013.  I was buzzed to learn that Johnson had been cast and hoped I’d get to meet him, but his scheduled days didn’t coincide with the times I could get down to visit the shoot.

So they sent me the above image from the set. It came with the proviso that it wasn’t for publicity use, which is why I didn’t feature it on the blog. Now I see that the BBC are using it to head up the obituary on their own website. So there you go.