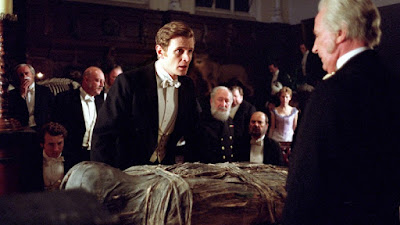 Continuing my ad-hoc program of old script uploads, today I’ve added my screenplay for BBC Films’ Murder Rooms. The series was created by David Pirie as a spinoff from his two-part drama about the relationship between the young Arthur Conan Doyle and his mentor, Dr Joseph Bell, whose observational methods would provide much of the inspiration for Sherlock Holmes.

The series of ninety-minute dramas played on BBC1 in September 2001. It’s never been repeated, nor had anything approaching a decent DVD release in the UK. There was a threadbare set of discs issued by IMC in the 4×3 ratio, VHS quality or worse. To get widescreen you had to shop outside the region, where even the best of the transfers was murky and lacking in shadow detail.

The episodes were actually gorgeously lit and shot on crisp Super-16. They’d look great in HD or on Blu-Ray. I know because I was there.

I loved working on the series. The critical notices were good, and so were the viewing figures. We geared up for second season that would kick off with three stories that had been commissioned but not made. I was asked for another, and put in my pitch. Ian Richardson shared his Joseph Bell research with me. David Pirie got a publishing deal.

Then the BBC pulled the plug and all plans were cancelled.

I later heard that this was the outcome of a turf war between BBC Drama and BBC Films. One insider told me that the show had been “too successful for the wrong department”. Co-producers The Television Company offered to take it over and finance it themselves, but were refused.

Instead the Drama department announced their own Holmesian project, a one-off Hound of the Baskervilles with the fine Australian actor Richard Roxburgh, so brilliant in Rake. It was okay, as I recall. A serviceable retread of the familiar material, but nothing special; certainly not worth losing Murder Rooms for.

Murder Rooms was a class production, handsomely made to feature standards. The series producer was Alison Jackson, with Jamie Laurenson as development exec/script editor. My director was Simon Langton – Simon effing Smiley’s-People Pride-and-Prejudice Langton. I watched and learned. He shot with graceful, understated, old-school brilliance – terms that could equally describe Ian Richardson’s approach to an old-school magisterial role. The editor came on set one day to observe, and confided to me that he wanted to see how it was being done because the footage was pretty much falling together.

I’d love to see it aired again. If only so I could get a  copy with some measure of the quality everyone put into it.

My episode was called The Kingdom of Bones, a title which would later be picked out of a list by my publisher for an unrelated historical novel because she didn’t warm to its existing title of Victorian Gothic. Which I still like, but I wasn’t going to argue. But it leaves me to explain why there are two KoBs out there, and why they’re not the same.