See a Dinosaur Eat a Cow. You Know You Want To. 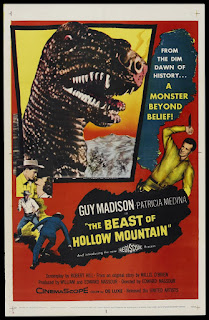 Here’s a film I’d never seen before, and have finally caught up with. I don’t quite know what to make of it. As you might expect it’s a B-movie through and through, but the production values took me by surprise. With the Mexican locations, and widescreen cinematography, its look is great.

Like the later Valley of Gwangi, it’s based on an idea by Willis O’Brien. In fact, it’s based on the same idea. The backroom genius of The Lost World and King Kong had a hand in the script but none in the special effects, which is entirely the wrong way around.

It’s a cowboys-and-monster movie. Apparently English and Spanish-language versions were shot back-to-back. In places it lapses into colourful travelogue but, to be honest, you’re grateful for the distraction. Unless you’re a fan of ranch boundary disputes it’s a long, long wait for the dinosaur action we’ve bought in for. And when it comes…

Well, what the hell. It’s called The Beast of Hollow Mountain and we’re not here because we mistook it for the Tarkovsky.

(Re that trailer, and just for the avoidance of doubt – no, there is no such thing as a ‘Sneak Peak”.)

Director Edward Nassour described his patented “Regiscope” process as a form of electronically programmed animatronic model work. It was later established by Cinefx’s Don Shay that the dinosaur action was mostly achieved by swapping out multiple models in different poses, elsewhere known as ‘replacement animation’.

Though the technique had been used with success in George Pal’s Puppetoons, Ray Harryhausen described its use in live-action features as “not quite practical”.