I’ll have some more information on upcoming stuff, including UK and US publication dates for The Bedlam Detective paperback editions, in a few days’ time.

For now here’s the BBC’s publicity still for Season 16 of Silent Witness, for which I’ve written a two-hour story.  The season begins this Thursday and if the shot puts you in mind of a 10cc wraparound vinyl album cover, that makes two of us. 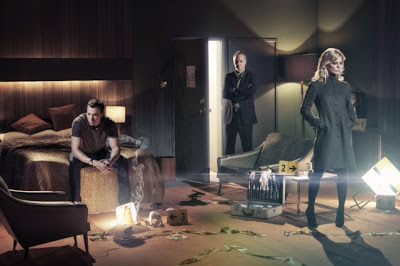 My two-parter is called The Legacy and I’ve just been told that it’s scheduled to run over the nights of Thursday, January 31st and Friday, February 1st.

The lineup for this story also includes the legendary Richard (The Haunting) Johnson.