Take It From There 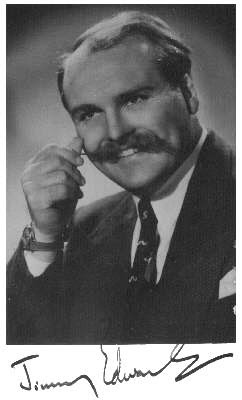 Jimmy Edwards – yes, Jimmy Edwards – sat on a chair in the corner of the room, and we all sat around him like cubs at a campfire waiting to hear a story. I remember him being smaller than I’d expected; small feet, and delicate hands. He was well-groomed and dapper, with the look of a man who’d spent part of the morning with his tailor and the rest of it in a barber’s chair. His un-named companion fussed a little too much, worrying about protecting him from some non-existent draught, until Edwards told him to stop. He was a familiar figure from my childhood; the blustering, cane-swishing headmaster of television’s Whack-O!, the faux-disorganised, trombone-playing comedy turn of Variety shows. But here, in the rehearsal room of Hull University’s Gulbenkian Centre, he dropped the persona and talked about craft.

He spoke of his early days as a stand-up act, filling in between nude tableaux at the Windmill Theatre. Of walking offstage when a cocky co-star’s practical joke made an audience feel uncertain and excluded (“You’re the one who lost ’em. You get ’em back.”) Of the fan who buttonholed him and demanded to know what Kenneth Williams was like (“He must have thought that we all live together in a big house.”)

Why is this an hour that I remember so well? It’s not as if the rest of my time in the department was incident-free or less interesting. I don’t recall the exact circumstance, but I’m guessing that Edwards was in a touring company with dates at Hull’s New Theatre and his visit to us was one of those ad hoc, opportunistic things arranged by a member of staff.

I suppose that, like most of us, I came to drama with some amateur acting behind me and only the vaguest sense of the history and infrastructure of the subject I’d signed up to study. In the end, those were the aspects that came to interest me most. A hidden world had been opened up for me, wider and more complicated than any I could ever have imagined. A world, created and populated entirely by social outsiders, that one might conceivably join. Let’s be honest, could it get much cooler than that?

I think one of the reasons for the clarity of the memory is that Edwards’ unaffected, professional chat was like a point of transition. I’ve been lucky enough to make a career in the business and there has to be some point where observing begins to turn into belonging, even if you’re not aware of it at the time.

Of similar retrospective weight and significance – at least for me – was the visit of actor John Franklyn-Robbins for the same kind of rehearsal room session. I believe he’d been invited by AV Centre head Mike Bowen and he didn’t come alone, but was accompanied by an assistant producer from the BBC whose name I’m ashamed to have forgotten, since her contribution was of no less value. They spoke with thrilling honesty of the crapness of BBC bureaucracy, and about the obstacles to creative enterprise in television drama. Then, as now, it wasn’t sunny anecdotes that people wanted to hear. Professional horror stories are always the ones that entertain and instruct the most.

Franklyn-Robbins was rarely a headliner, but his career as a rock-solid character player was a formidable one (a long career that would range from Broadway and the RSC to roles in Doctor Who, The Avengers, and Star Trek: TNG). His was an unshowy professionalism that compelled respect, and his stories came from direct experience. When someone asked a final question about the future of television drama, he and his companion both indicated the whole of the room and replied in unison, “It’s you.”

Roll forward to 2012. I took part in a week-long TV Drama Lab in Berlin, devoted to finding new pathways to international production.On the Thursday afternoon there was a public session in which I sat on a panel with two American writer-producers and we talked about the showrunning experience on both sides of the Atlantic. It was the usual rollercoaster mix of stories of terrible odds, breathtaking setbacks, and executive shortsightedness. The crowd was receptive and the energy in the room was palpable.

In the Q&A I was surprised to hear some obvious British voices putting questions from the back. As the crowd broke up and I moved toward the next event, I took a couple of minutes to seek them out; it was a party of young British actors and they’d driven all the way to Berlin, fifteen hours in a van, just to attend the session. Their spirits were up and their enthusiasm was high. Which was just as well, as they were driving back that same evening.

And as we spoke, I found myself thinking, I know you. Because I’ve been you. I offered some further encouragement and we swapped cards.

Meanwhile, my Australian cousin is always asking me what Hugh Grant’s doing. I’ve never met Hugh Grant. We’re in different parts of the business. She must think that we all live together in a big house.

One response to “Take It From There”