I know I haven’t updated the blog for some time, and if you’ve been checking, I’m sorry. It’s partly laziness – so much easier to fire off a quick snarky mindbite on Twitter than to actually organise a thought or two into something worthwhile – and partly personal, but mostly it’s business.

The personal – this summer I forced myself to take weekends off, and decided I rather liked it. If I don’t consciously remove myself from the proximity of the study I can find myself drawn back to the keyboard. I’m not even aware of it happening, but I get pulled in by its gravity like one of those rolling coins spiralling down into a charity collection tub. And then, because I’ve sat myself down without a plan, I don’t actually achieve anything when I get there – I just check my emails and fart around on Twitter.

I still check my emails and fart around on Twitter. But at weekends I do it on my phone, somewhere nicer.

The business part – well, last year was weird, including a bunch of projects you’ll never hear of because they didn’t happen. None of them was my own. In each case I was brought on board to develop a property which never made it to launch. For a while that suited me, again for personal reasons, but it quickly grew frustrating. I’ve developed stuff I didn’t create before now, Crusoe being a case in point. But it’s not what I’m in the game for.

So I blocked out some time and wrote a spec TV pilot, which no one in the UK wanted but which a producer friend took to MIPCOM where it was picked up by one of the US networks. More about that in due course.

Now that I had something to plan around, I could wind up the third-party commitments and schedule-in something of great importance to me, and that’s the third Sebastian Becker novel. It’s been on the stocks for a while, devised and researched and planned down to pretty much the last detail.

But here’s the point I always have to make about novel writing and screenwriting; their working rhythms are totally different, and they can’t coexist. They can’t for me, anyway. A screenwriting career is a constant juggling of drafts, pitches and projects. For a novel I need to be able to dedicate big blocks of dedicated weeks.

The Becker books are complicated beasts to conceive and plot. If you’ve read either The Kingdom of Bones or The Bedlam Detective you’ll appreciate that each is an ambitious one-off, not the kind of series where you can turn a handle and crank them out.

And their history is a complicated one too – of film rights bought and sold, of auctions and ousted editors and wound-up imprints and orphaned acquisitions… and for these reasons among many others the Becker books have a special importance to me, like the puppy that survived the hurricane. So much of this summer was set aside for the completion of The Authentic William James, and I’m happy to say that the pieces fit together.

None of which is what I set out to tell you.

The actual aim of this post was to shill for a Kindle promotion for the novels next week. It’s to mark my birthday (don’t ask). On Monday October 13th the price of four of my ebooks (two on Amazon UK, two in the US) will be slashed to… well, buttons at first. But only at first. The prices will rise by increments over the following week until they’re back at the regular level. Apparently this enthuses people to jump in and buy early. Well, Amazon seem to think so. And they seem to be rather better at this than I.

These are the titles: 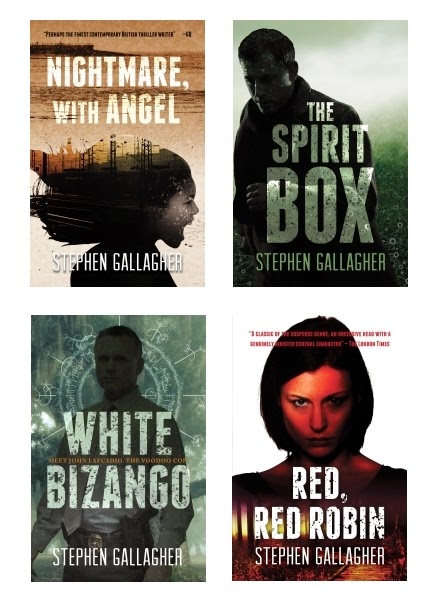 The Spirit Box and Nightmare, with Angel will be on offer at Amazon.co.uk. White Bizango and Red, Red Robin at Amazon.com.