The village of Haworth, Yorkshire home of the Bronte sisters, has pretty much turned itself into a living museum. In fact the parsonage where they grew up is an actual museum, preserved in period, looking across headstones to the church at the top of the town. If you squint and ignore the tourists you can picture the steep cobbled main street as it once must have been. The pharmacy where Branwell bought his laudanum will sell you fancy soap.

It’s buzzing now, but it must have been pretty grim back in the day. The drinking water supply ran through the graveyard, I’m told.

About three miles out and across the moor stands the ruin of Top Withens, a farmhouse said, with little in the way of any hard evidence, to have been Emily Bronte’s inspiration for the Earnshaw farm named Wuthering Heights.

Last weekend we set out for the museum, but with better-than-expected weather we changed plans and struck out from Cemetery Lane and across the moors instead (see picture above for what ‘better than expected weather’ means for Yorkshire). In the footsteps of Heathcliff, here was our approach: 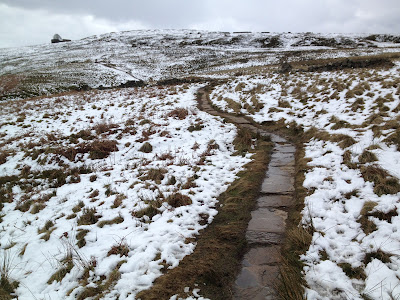 And once there, you find this: 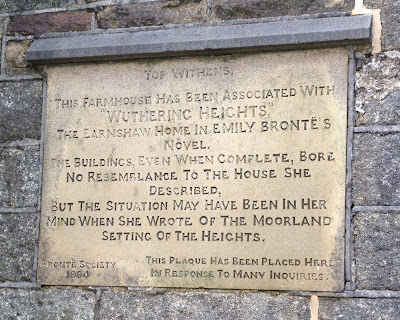 I’m a sucker for a real-world place that’s tied to an act of the imagination, whether it’s a literary association or a movie location. I’ve stood in the cellar of the house in which Poe wrote The Black Cat. Sought out the Batcave in Bronson Canyon. Ordered buffalo steak in the Wyoming hotel where Owen Wister worked on The Virginian. Visited the castle at Elsinore, which is more than Shakespeare ever did.

“The buildings, even when complete, bore no resemblance to the house she described.”  And you know what? I hardly care. Actually, no, I don’t care at all, because I know the difference between inspiration and reportage. What a locale gives you is an insight into the experience of the author, whose purpose is that of the tale. Who is free to pick out this element from here, and that from there, and add a memory or a fantasy or two, and resite the whole shebang on the moon if it suits her driving purpose.

I found myself thinking of the responses to Harper Lee’s Go Set a Watchman in which readers declared themselves shocked and upset to find that their beloved Atticus Finch was ‘exposed’ as a racist. As if Lee were a biographer; as if the novel were not a shelved tryout for a radically different version of the final character.

It shouldn’t be breaking news that writers make this stuff up, organising the steps to move toward some distant goal that exists only as a vague sense of certainty. If we’re lucky the finished product will contain at least a grain of the truth we were trying to define. In a perfect world we’d nail it completely and then have nothing further to say, ever. That never happens, by the way – unless, perhaps, you’re Harper Lee.

For my part, I’m looking forward to the next novel in the Atticus Finch trilogy. I guess Lee’s lawyer hasn’t quite finished finding it yet.