The British Horror Movie You’ll Never Get to See, and Why 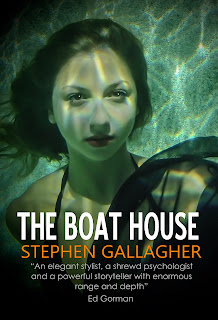 Last weekend found me back in Pooley Bridge. It’s a village at the northern tip of Ullswater in the Lake District with a post office, a couple of pubs, a handful of tourist shops, a posh bistro, and a steamer pier. Ullswater is, for my money, the fairest of the Lakes, and the village was the model for the settlement that I called Ravens Bridge in my novel The Boat House.

It’s the story of a Russian hitchhiker who goes to ground there in the 1980s, on the run from the authorities and from the Soviet-era police agent sent to track her down. She stays because the woods and lakes remind her of her Karelian homeland, a place she was forced to leave because of a growing obsession with deaths by drowning. She finds a seasonal job and a place to crash, and works hard to put down some roots.

I messed about with the place for fictional purposes, of course. I put a lakeside restaurant on the steamer pier and gifted the town a boatyard. I had form for this; it was in the adjacent valley of Martindale that I’d found the setting for my first ‘proper’ novel, Chimera, just a few years before, and early efforts to teach myself some basic movie skills had involved a 16mm camera, a rented shooting lodge on the Dalemain estate, and a group of press-ganged friends and coworkers.

With The Boat House I can fairly say that I suffered for my art. To research Alina’s backstory I made a rail trip from Helsinki to St Petersburg and came home with a dose of Hepatitis A, courtesy of the kitchen hygiene at the Europiskaya Hotel. This made for a somewhat fevered writing process but the result, heavily edited with a cooler head, felt exciting and unique. It took a while to get published, but when the book deal came it was a good one. It wasn’t long before screen rights were optioned by a respected producer, and with her I produced a treatment that snagged us Film Council development funding. By now her feature-director husband had become involved. The resulting script drew in a major studio. An A-list cinematographer was attached and a top-notch production designer – if you’ve ever worked in film you’ll know how utterly crucial to a movie’s look and tone that is – headed up to the Lakes to start finding locations. It was at this point that I found myself off the project.

What followed was a perplexing time. My unused screenplay was earning its keep as a personal sample and fetching me new work, while the producers kept on commissioning scripts from other writers. I’m not sure how many but after five I stopped counting. These weren’t rewrites, but new first drafts. I didn’t see them all, but I did see a couple. Here’s the problem; all this time, the meter had been running. Even unmade scripts don’t come cheap, and nor do feature film department heads. By the time the option expired the charges run up against the production were significant.

I can sell the book again but those turnaround fees would need to be repaid on the first day of principal photography by anyone taking on my screenplay, or any subsequent version of it. Chump change for an American studio, I know; but The Boat House is a British Picture, albeit one with a Lewtonesque vibe. It’s closely bound to a landscape with a specific sense of place, and that kind of money is a budget killer for any British producer.

And that’s why, barring a miracle, you’ll never see the movie. 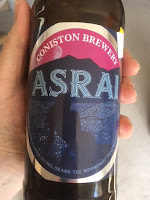 So what’s prompted me to be telling you this now? Well, getting back after a four-hour walk on the hottest day of the year so far, I called into the Post Office to pick up a cold beer or two. Don’t judge me, I’d earned it. The Lake District boasts a number of craft brewery labels, but one in particular caught my eye; on the front the image of an ethereal lake creature, and on the back, “By the historic Coniston Copper Mines, mythical Asrai emerge from the caves above the moonlit Levers Water. Cold and pure, these elusive creatures fear capture by man lest they fade away and turn into pools of water.”

Mythical Asrai? Moonlit waters? That’s pure Boat House stuff. Dang. Where was this brew when I was writing?  For inspiration I’ll take it over Hep A any time.

Pooley Bridge took a severe battering in the storms and winter floods of 2015, and its charming sixteenth century river crossing was destroyed and swept away. For the short term it’s been replaced by a temporary metal bridge with a permanent replacement planned for construction later in the year. A number of padlocks on the ironwork have begun to appear this season, like the ones that brought down the parapet on the Pont des Artes in Paris.

I guess if you want to hedge your bets when declaring undying love, a forever lock on a temporary bridge is the way to go. 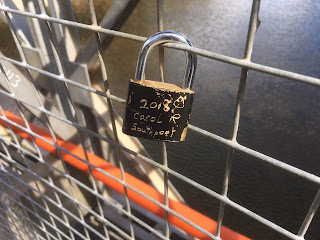 One response to “The British Horror Movie You’ll Never Get to See, and Why”