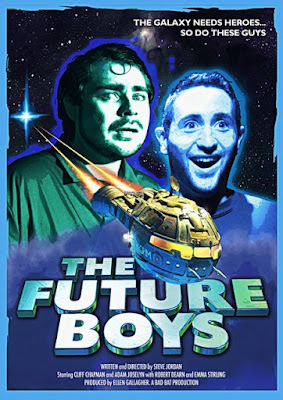 I’ve been following this series of plays since The Future Boys’ 2012 debut in Dead Static at Camden’s Etcetera Theatre, the classic ‘playspace over a pub’ where new talent and old hands get equal exposure. With Pilgrim Shadow and last year’s King Chaos the company moved to the Tristan Bates Theatre in London’s West End, expanding the cast, increasing their audience, and ramping up the absurdity.

Writer/director Stephen Jordan is a child of 90’s SF culture, and these are character comedies bounced off science fiction tropes. Absurd, yes, but not spoofs. They employ sitcom structure with a classic pairing at its heart, an Odd Couple who both need and annoy each other in equal measure.

New material, new medium; the next outing for the company will be in the form of two new and original audio dramas recorded BBC-style before a live audience, supported by a Kickstarter campaign that’s running until March 4th.

The most basic pledge will get you the downloads, while other levels bring in the usual swag options. These include tickets to the recording at the Leicester Square Theatre on Thursday March 30th at 7.15pm.

Bad Bat’s previous productions include The Probleming, Global Mega Incorporated, and The Ghost Train Doesn’t Stop Here Any More, an Amicus-style portmaneau show in which I had a playlet.

Update: the Kickstarter editorial team have selected The Future Boys as one of their curated “projects we love”.

Update to the update: the campaign reached its target.