The Imitation of Life 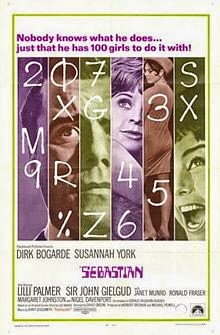 In some of the awards-season discussions of The Imitation Game I’ve noticed a subtext in which anything other than support for the film is read as an act of disloyalty toward Alan Turing himself. Much as, once upon a time, thinking The Green Berets an awful movie branded you as anti-American, or finding 12 Years a Slave a grim duty-watch made you an apologist for its horrors.

Personally, I thought The Imitation Game a passable time-filler. But then I’m not a big fan of re-staged histories, which seem to me the least ambitious use of the drama toolkit. I must be in a minority because they come out in starry droves every awards season, an opulent parade of beards and wigs and rubber noses.

Like it or don’t like it but don’t conflate the film with the man who, more than a posthumous pardon or a memorial, deserves a time machine and an unqualified apology.

I was set thinking about Sebastian (1968). You probably won’t know it. It’s very much a ‘Swinging 60s’ movie in which Dirk Bogarde plays a charismatic Oxford academic overseeing a squad of female codebreakers. Given what was and wasn’t public knowledge at the time, both about the Bletchley Park scene and Bogarde’s sexuality, it now feels like one component in a dizzying meta-cocktail of movies and material.

For years Sebastian was just a remembered viewing from my teenaged years, but now someone’s put it onto YouTube in its low-res entirety. It’s a rarity with an impressive pedigree – Michael Powell producing, the Cinematographer was Gerry Fisher, score by Jerry Goldsmith. Based on a story by former wartime cryptographer (And Peeping Tom screenwriter) Leo Marks, which explains a lot.