The Loneliness of the Long-Distance Writer 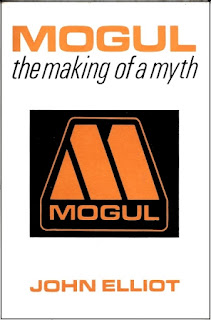 I’m currently revisiting this modest second-hand find from a few years ago, and confirming that it’s the best book on British TV drama production I’ve read. It was published in 1970, and is about a ’60s BBC show that I never watched.

John Elliot, who died in 1997,  was a BBC staffer who in 1961 cowrote the landmark SF serial A for Andromeda with astronomer Fred Hoyle. In 1963 he resigned from his job as Head of the Script Department to work on his idea for an ambitious drama series about the global oil industry. He had no encouragement other than an indication from Elwyn Jones, Head of Serials, that if Elliot came up with something, he’d look at it. So Elliot launched off on a self-driven series of meetings with oil company executives in a search for story background, industry allies, and stock footage.

The result was a spec script and series proposal for a show called Mogul. Rechristened The Troubleshooters in its second season, it would run for seven series until 1972. The book is Elliot’s first-person account of its development, selling and progress into production.

You might think it would be dated and irrelevant, but it isn’t. You don’t have to know the show – I was aware of it growing up, but it was never for me. I think I saw it as drama for the kind of serious grownup that I never much wanted to be, and would probably appreciate it more now. But much as we can look at the classics and see timeless principles in action, many of the challenges faced by Elliot are faced by show creators today.

“For the first scripts of a new series there are far more imponderables than for a single play. Which of the main characters will continue, and what will be their enduring roles?  What style, what set of circumstances can be established in one short episode which will not only satisfy the immediate demands of its viewers but be germinal for many more to come? A whole world has to be touched into life by a single incident if the elements which make it serial matter are to be remembered and recognised and accepted in the following weeks. It is like wearing bi-focals: you have to be able to look at the immediate and the distance at once.”

And this is Elliot on the BBC’s Television Centre building in White City, his tone reflecting feelings of my own that made me unable to enter into the sentimental protests at its closure with much enthusiasm:

“It seems odd to have to describe that West London television factory to the millions who see programmes from it; yet, if you do not know it, it is hard to visualise its sheer uncoordinated ugliness or the wilderness in which it is set, or the vitality which it conceals.

The site was once that of an Edwardian exhibition, and fragments of aged stucco were for a long time to be found at its edges, crumbling and tarnished like icing from an old wedding cake. The Metropolitan Railway sweeps past on arches, and the nose-to-tail traffic on Wood Lane rumbles all day past the gate. Across the road lie a steel yard and the Kensington Refuse Department, and to the north rise the stadium stands and lamps of the White City. It is like a cathedral in a slum. The site itself is the shape of a chump chop – and so, consequently, are the buildings, with a tall tower at one end and a muddle of builders’ huts at the other. The main block, being circular, is built around a deep cylindrical well where no water plays in the fountain and grass is only grown after infinite persuasion. This well is dominated by a gilded and frankly naked statue of Ariel, known locally as the Coq d’Or.

Inside, offices open off long, hushed corridors which are circular. To advance along them too impetuously is to end up where you started, and this could equally apply to one’s career. Behind the offices, the studios radiate like spokes, supplied by a service road at the back with scenery and equipment, so that no such squalid reminders of actual production ever cross the paths of executives who enter from the front. It is a system which works; but it is a little intimidating.”

The book is a thoughtful, and slightly rueful, account of the long. lonely, and uncertain process of working up an idea to the point where it can be shown to the world, of maintaining belief in the work despite seeing it met with indifference, of the justified anxieties felt when others move in on the process, and of the tristesse felt as the price of success on seeing control taken by those very people who offered you no encouragement in the first place, and who now get to impose their ideas over your own. It gives the truest sense I’ve encountered of the freelance writer’s process and life.

Thanks to the BBC’s infamous wiping policy, many of the show’s episodes are lost and only one survives in colour.

Elliot’s book is out of print. I’ve checked and there are a few copies out there. But not many. So be quick. 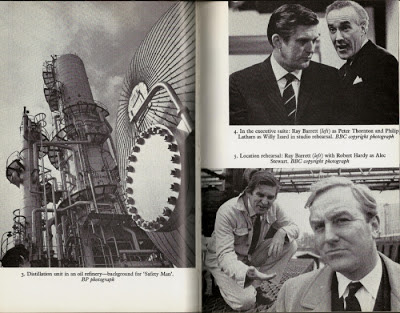 3 responses to “The Loneliness of the Long-Distance Writer”