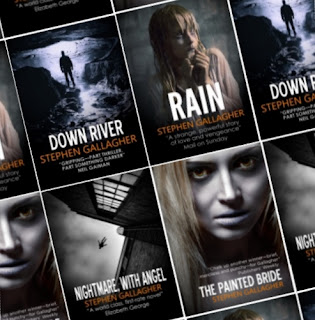 A retrospective ‘umbrella title’ that’s become attached to four consecutive novels written during my publishing run with Hodder & Stoughton, just before the balance of my career tipped more toward screenwriting.

Four linked stories in a shared Northern landscape, playing variations on a theme of flawed good versus complex evil. Though it was never my intention, some were inclined to read it as a deliberate move to leave my horror/fantasy roots behind and claim a piece of the mainstream. It wasn’t, but no matter. I was just looking to create different monsters.

Down River is the story of Nick Frazier and Johnny Mays, two childhood friends reunited as plainclothes police officers, one of them tragically unbalanced and ultimately dangerous. It features the promotion of Jennifer McGann from uniformed duties to CID trainee, and includes witness evidence from a teenaged hitchhiker named Lucy Ashdown.

In Nightmare, with Angel, a convicted criminal (Ryan O’Donnell) earns redemption through a self-sacrificing act that reconciles a lost child (Marianne Cadogan) with her equally lost father. Jennifer McGann is the investigating officer on her first big solo case.

Rain follows Down River’s hitchhiking teenager Lucy Ashdown to London in her murdered sister’s footsteps. She’s pursued by suspended DC Joe Lucas as a favour to her dad. She outwits Joe at every turn, but fails to see that the closer she gets to an answer, the closer she is to sharing her sister’s fate.

The Painted Bride focuses on the case of Frank Tanner, a car dealer whose wife has gone missing; no one believes he’s killed her apart from Molly Gideon, his sister-in-law. Molly’s a recovering heroin addict with no credibility, but she sacrifices everything to protect the children and bring him to justice.

They’re tales of ordinary people thrust into extraordinary circumstances. The settings are Northern cities, moorland, marshes and coastline, plus the ‘80s London of Rain and Nightmare’s European angle with the fall of the Berlin Wall. In each of the stories, the violent are broken and the victims are strong. They prevail.