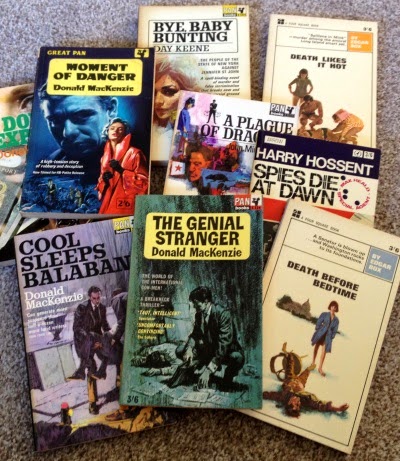 Last Summer I discovered a bookshop with a healthy haul of ’60s paperbacks, many of them in great condition for their age and fairly priced at three quid a pop. So of course I kept going back.

I put my focus on popular fiction writers that are now forgotten, or had passed me by, or that I’d been aware of but never read. It was a chance to see if my affection for the literate 70,000 word thriller had altered or diminished over time. Also to appreciate the all-but-forgotten art of the British commercial illustrator, for whom the Photoshopped stock image has proved an inexpensive substitute.

(They say you can’t judge a book by its cover. But don’t people do that all the time? Given that it’s the cover’s purpose?)

Any book that caught my eye would be subjected to the usual test, which is to open a page at random and read any paragraph. You know within a few lines if the writer can write, just as you know after a few notes whether a person can sing. Maybe it’s a tribute to old-style editing, but back then fewer published authors seemed to get away with just plonking it down.

I’m still working my way through the reading pile, and will be for some time… I don’t read as much as I once did. I blame this partly on The Job, because I pay too much attention to technique and can’t lose myself in story as easily as before, and on bad TV, because there’s always something on.

What am I finding? A couple of things stand out. Readers are more educated in procedure now, and won’t stand for investigations driven by intuition or an investigator’s whim. And though there were notable female thriller writers active at the time – Helen MacInnes and Josephine Tey spring immediately to mind – the female characters in this male-dominated field are largely undercooked stereotypes. They fall into the rough categories of fantasy wife, virgin to be rescued, or bitch to be tamed.

As well as discoveries – Donald MacKenzie deserves to be better-remembered than he is – the paragraph test spawned a few surprises as well. The quality of some writing was so at odds with the author’s lack of reputation that I was driven to Google to find out more. What I’d often find was a famous writer knocking out decent thrillers for money. E V Cunningham turned out to be a pseudonym for Freedom Road and Spartacus author Howard Fast. The witty and elegant Edgar Box proved to be none other than Gore Vidal.

There’s a line in “Box’s” Death Before Bedtime that maybe hasn’t travelled as well as some. Camilla Pomeroy, wife of the prime suspect in a Senatorial murder case, has wangled her way into the narrator’s bed. We skip tastefully over the gymnastics, and in the aftermath:

She sat up on one elbow and pushed her hair back out of her eyes. She was obviously proud of her body; she arranged it to look like the Duchess of Alba. “What on earth would my husband say.”

The Duchess of Alba? I didn’t get the reference, so I had to look it up. The educated reader of the time should have been thinking of the pose in this painting: 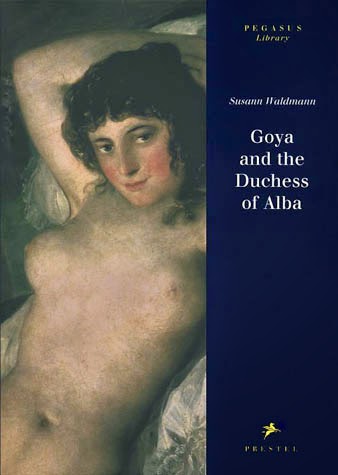 Those with Safe Search off can find the complete image here. Spain put it on a stamp, so it’s hardly scurrilous. Its actual title is La Maja Desnuda and art historians argue over whether it represents the Duchess at all; but the face is recognisable from Goya’s formal portraits of his subject, with whom he was said to be obsessed.

Having no idea of what Vidal was shooting for with the image, I searched for The Duchess of Alba.

Here’s what came up… 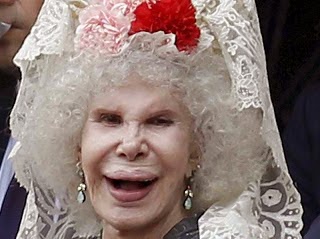 Yes, that’s the Duchess of Alba.

All I can say is, the culture’s moved along.