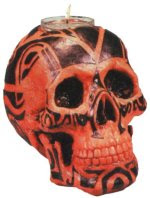 One of my closest friends lives in New Orleans. We’ve managed to get together no more than half a dozen times in the thirty years since we met, but that’s how some friendships can be. First we kept in touch with long letters, the occasional phone call, and the the annual exchange of bizarre Christmas gifts between our families. Well, I say bizarre. But I imagine they’d think the voodoo kit they sent us to be unremarkable, while finding our Chorley Cakes quite exotic.

Later on we switched to email. The distance was no less and the messages tended to be shorter, but now our news flew back and forth in something like real time.

So we were able to cheer him through his midlife career change and share the joy of his daughter’s Bat Mitzvah. We could sympathise during the bruising divorce in which he discovered all the disadvantages of having married a lawyer.

And when someone new came into his life and he hesitated because his faith in happy endings had been shaken, there was someone standing outside the situation who could urge him to stop hesitating and go for it.

Then came the problem. The Second-Marriage Wedding Present on the Other Side of the World.

It’s not something you can really mark with a tin of Kendal Mint Cake but in all honesty, what can you do? Pedal bins and bedlinen are poor candidates for sending by air mail, and I don’t think there’s anywhere that you can use Debenhams vouchers in Louisiana. And, besides… they’d got that stuff already.

It took three weeks of racking my brains. I think the lowest point came when I wondered how much it would cost to name an asteroid after the happy couple.

Then I got it. A proper, practical, traditional wedding present. A useful object for a happy home.

I know, you’re thinking, That’s it? A bread knife? Three weeks of sustained mental effort and that’s what he came up with? But hear me out and remember, the chances are you’ll face this problem yourself someday. And on that day, you may well thank me.

Firstly, not just a bread knife, but a bread knife. Balanced in the hand, fine tempered steel, shockingly expensive… not just some tat off the local market but something akin to a sword forged by a fallen samurai master tempted out of retirement to make the most exceptional weapon of his career.

A good one, in other words. It slid neatly into a poster tube for mailing purposes, and with it went the following note of explanation.

OK, so you’ve looked at this and it seems like an odd choice for a wedding gift. But at least hear out my logic…

1. When kids marry they need absolutely everything useful, from eggcups up.
2. But when grownups marry and merge households they end up with TWO of everything useful.
3. So people buy them ornamental stuff, which they have to hide and then remember to get out and put on display when the donor comes to visit.
4. Unless the gift was money or booze, which both disappear in due course.
5. But only parents and elders can do the money thing.
6. And booze doesn’t airmail well.
7. But everybody needs a bread knife. Even vegetarians and vegans.
8. A good bread knife is significantly better at its job than an ordinary bread knife.
9. Everybody buying for themselves buys an ordinary bread knife.
10. Even if you end up with more than one good bread knife, a busy kitchen can easily make use of two.
11. If you wind up with more than two, just keep it in the packaging and the next time a wedding amongst friends or family comes up…
12. Well, when kids marry they need everything useful.

But please bear in mind that if one of you uses it to kill the other, then that would be a VERY BAD END to this story.