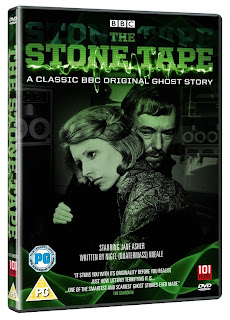 Despite being a single studio drama first broadcast on Christmas Day 1972 and reshown only once a few months later, Nigel Kneale’s seminal TV ghost story still seems to have managed to mark, scar or otherwise influence just about everyone who saw it back then. Amongst my generation of horror writers, most either acknowledge a debt or at least are aware of its effect on the field.

The Stone Tape was first made available on DVD about a decade ago. It was one of a series of BFI releases of classic television drama.  To say that it had been possibly the most wished-for and anticipated release of its kind would be no exaggeration. There had been rare festival showings of the British Film Institute’s archive copy, but otherwise The Stone Tape had been inaccessible for almost 30 years. More than a memory, almost a legend. Murky tenth-generation bootlegs circulated on VHS and versions of the script could be found out there on the internet, but these only sharpened the sense of absence. They did little to mitigate it.

Now the drama has been re-released in handsome form by niche distributor 101 Films, in a version that includes the illuminating commentary/conversation track with Kneale and Kim Newman.

To a restored country mansion called Taskerlands comes a team of research technologists led by the controlling and bombastic Peter Brock (Michael Bryant). The team includes nervy and damaged computer programmer Jill (Jane Asher), and they’re here to brainstorm their way to a new form of information storage and transmission that anticipates the digital revolution – flash memory, in particular – in uncanny detail.

Brock believes that he may have glimpsed his personal and professional grail in the form of Taskerlands’ resident ghost, a recurrent haunting that has driven the builders away with their work uncompleted. No believer in the supernatural, Brock seeks a scientific explanation. Matter, he suggests, may be able to absorb an emotional charge that can be triggered to replay the moment of its imprinting directly into the medium of the human mind; that, in essence, is the reality behind the ghost and the nature of the ‘stone tape’.

This is pure Kneale, the application of the rational to the irrational, not to demystify it but to take it to an entirely new level. In turning their equipment onto the phenomenon, the scientists not only fail to tame it… they reveal it to have depths and dimensions that are way beyond their hope of control.

The big, serious, one-off TV studio drama is now a lost form, seen only in occasional ‘event’ pieces like George Clooney’s Fail Safe or the BBC’s live Quatermass Experiment makeover. Such dramas resemble the film form in a superficial way – scenes, shots, cuts – but are essentially theatrical. The acting dictated the rhythm of a scene. The shot-to-shot cuts were planned by the director but actually made by a vision mixer in the gallery, following the performances in real time. Postproduction editing was kept to a minimum and mainly involved the stringing-together of completed scenes into a continuity. More complex edits were often required for outdoor sequences where multiple-camera technique had been unfeasible, and these tended to be less successful.

(There were various reasons for this – when I first started out in TV, union practices and the technically cumbersome nature of two-inch tape ensured that it was top-grade video engineers who did the actual cutting. The amount of expensive machinery that had to be tied up meant that all video editing was done against the clock, and in a hurry. What you can now do on your phone once involved analogue copying back and forth between three massive playback-and-record machines, each one the size of a small car).

As far as The Stone Tape is concerned this means that Peter Sasdy’s fluent, ambitious direction pushes the medium right to its limits and often exposes them. This unsteady crane shot, that patently fake stumble… and everybody shouts a lot, the way they do in the theatre. And the visual effects are… well, the effects are purely token in a disco-light kind of way.

But nonetheless, The Stone Tape justifies its reputation as a landmark achievement in TV drama, in the genre, and in Kneale’s career.

Trust me. Your life is incomplete if you haven’t seen it yet.

One response to “The Stone Tape”