This Time of Year…

Late one December I got a surprise phone call from Brian Clemens. It was a surprise because, although we’d met a number of times over the years and shared consultancy credits on BBC1’s BUGS, long phone chats weren’t something we really did. I wrote about it here.

If you know my stuff at all you’ll be aware of Brian’s influence on my own career. In its creativity, professionalism, and sheer variety, his work set targets that I could only aim for.

About three weeks later, the news broke that Brian had died on January 10th.

Here we are onstage at the Manchester Festival of Fantastic Films, back in (mumblemumble). Neither of us having a good time at all, as you can see. 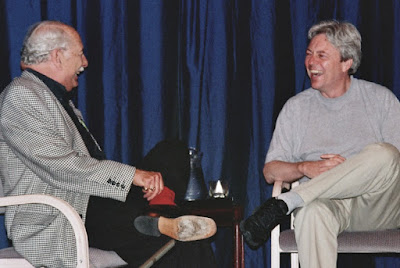 Thanks to Stephen Laws for sending the picture.

One response to “This Time of Year…”