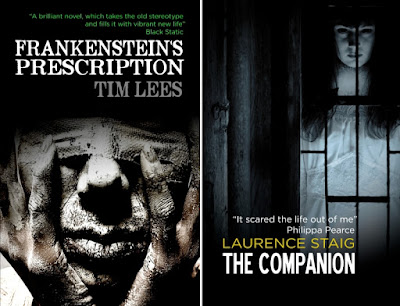 Frankenstein’s Prescription Banished to an isolated rural for killing a fellow student in a duel, Hans Schneider meets the mysterious Dr Lavenza and learns about Frankenstein’s prescription—the secret of eternal life. Together, Schneider and Lavenza set out to collect the missing pieces of the formula. But they are not alone. From Germany to Rome, from Rome to Paris, to the failed and wretched Eden of an all-too-human God, a dreadful creature follows in their wake and brings destruction wherever they go.

First appearance in paperback. “A unique piece of work; fast, funny, and with a terrific sense of period and place. Frankenstein’s Prescription reads like the bastard creation of Jonathan Swift and Jimmy Sangster.”

The Companion A broken church window, smashed in a bid to contain the power trapped within its stained glass… The desperate sobbing of a child who isn’t there… When restoration expert Kit Farris moves into the adjoining Grange with his three daughters, how can he possibly know what dark forces his work will unleash?

Previously published as Shapeshifter, now appearing for the first time under its original title in an edition revised and expanded by the author. “An excellent book, which celebrates and transcends genre. As much family story as ghost story, a tense drama of abuse, neglect and longing… An old-fashioned ghost tale with a modern edge, consciously a tribute to M R James in its setting and atmosphere.” Neil Philip, The Times