In London for a couple of meetings last Thursday, I called by to spend a few minutes at the Treasures of the British Library permanent exhibition. That’s the beauty of our free museums, as I found in the 70s when I was in the capital looking for a way into film or TV; when you’re broke (as I was then) and have time to fill, a regular half-hour in the National Gallery or the odd hour in the V&A can lift the spirits and leave you with a sense of the time well spent.

A chap was tuning up a piano. Not something you expect to find in the foyer of a library. When I took a closer look I saw that a stage was being set for the launch of a new exhibition titled Victorian Entertainments: There Will Be Fun. The barriers were still up but I could see enough to know right away that I’d surely find it of interest.

Roll up to celebrate some of the most popular entertainments of Victorian times performed in a variety of venues from fairground tents to musical stages.

Focusing on five colourful characters, follow their stories as we bring the worlds they inhabited to life. These Victorian A-listers include Dan Leno, the original pantomime dame and ‘funniest man on earth’, John Nevil Maskelyne, magician and manager of ‘England’s Home of Mystery’, and the great circus showman ‘Lord’ George Sanger. Also hear of those whose fame has now faded such as Annie De Montford, a mill worker turned mesmerist, and Evanion the Royal conjuror. 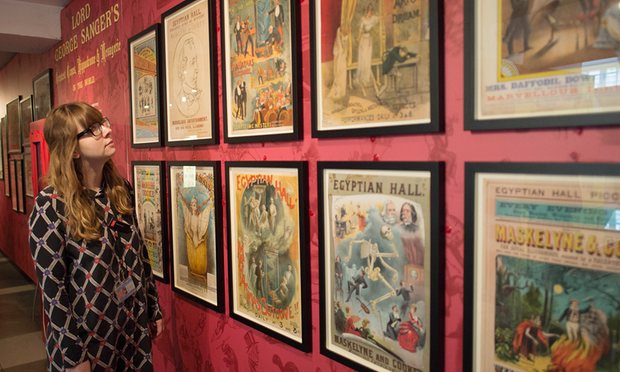 If you’re familiar with the Becker novels you’ll know that they largely play out against a backdrop of the entertainment business from the 1880s to the Edwardian era. From Music Hall touring companies to fairground boxing booths, from Wild West acts to the legitimate stage. And if you aren’t familiar… well, you’ll have to take my word for it.

Two of the personalities covered in the exhibition (and the live presentations scheduled to accompany it) were central to the stories’ conception, with their lives and histories providing a wealth of insight and detail. ‘Lord’ George Sanger was a prominent showman, and John Nevile Maskelyne was probably the most eminent British illusionist of his day. Here’s where Maskelyne – in spirit, rather than in person – figures in The Kingdom of Bones:

The Egyptian Hall stood in Piccadilly, and had been England’s Home of Mystery for the past sixteen years. It had the frontage of an antique temple, four storeys high and with the look of something hewn from the rock of the Nile valley. Two mighty columns braced the lintel above its entranceway. Two monumental statues stood upon the lintel. All illusion, in plaster and cement. To either side of this slab of the ancient desert continued a row of sober Georgian town houses.

Within the building there were two theatres. One had been taken by Maskelyne and Cooke for a three-month run of magic and deception that still showed no signs of ending, more than a decade and a half after it had begun. The other was used for exhibitions and the occasional show.

A few minutes before midnight, their four-wheeler drew up outside. Edmund Whitlock stepped down to the pavement, where he turned and offered his arm to Louise.

To an observer’s eye the halls were shut-up and dark, but a watchman waited to let them in. Louise moved with her eyes downcast, looking neither to left nor right. They went directly backstage, where the Silent Man waited to lead them to the auditorium.

It was an intimate house, with a small stage and a runway out from the footlights across the orchestra pit. The house lights were on and the curtains were up; Maskelyne was between shows, so his sets were half-struck and the theatre’s back wall was visible. About a dozen figures were out there in the stalls, all male, no two of them sitting together although some were conversing across the rows in raised voices. They fell silent as Whitlock led Louise to the centre of the stage, where a chair waited. He left her there and moved to the footlights.

“Gentlemen,” he said, his voice ringing all the way up to the hall’s domed ceiling. “Welcome. I have spoken to each of you in turn before this evening.”

Louise sat on her chair and continued to look down at the stage. Whitlock had taken her to Bond Street the day before, to be fitted for a new dress that the milliners had run up overnight. Her hair had been artfully pinned by the Mute Woman, who had a talent for such. Her face was powdered and her natural pallor relieved by the merest hint of rouge.

Over by the wings, she was aware of the Silent Man easing out of the shadows and into a spot from where he could observe the auditorium.

“I know you are intrigued,” Whitlock said. “I know you will be discreet. And I know the fascination that Miss Porter holds for each of you. Tonight I offer the chance for one man to pursue that fascination to the full.”

I stayed on an extra day in order to return when I knew the exhibition would be open. It’s sited in the BL’s entrance hall and isn’t huge – several display cases and some video material, along with walls of vintage poster art – but for someone with a love of such ephemera it didn’t disappoint.

There are some props and personal effects but it’s mostly printed matter in the form of handbills, tickets, programmes and other publications, much as you’d expect from a library’s archive. Most interesting to me was the material from the collection of Henry Evans, illusionist, who as ‘Evanion’ had a fifty-year touring career on the stages of Britain. Presented here as ‘one of those whose fame has now faded’, to me Evans represents the true heroes of popular entertainment, hard-grafting professionals with a lifelong commitment to their often thankless trade. He was to die, elderly and impoverished, of throat cancer in the Lambeth Infirmary, a charity hospital joined to the workhouse in which Charlie Chaplin had been a child inmate. Forgotten, perhaps. But faded? No.

Afterwards I looked in the gift shop, and was a tad discouraged to see no merchandise in the exhibition-related area. Just Shakespeare stuff and, let’s face it, he hardly needs the publicity. The main part of the bookshop offers a nice line in vintage detective fiction, all rather well-chosen, some of it in retro bindings, and with some rare old titles republished under the BL’s own imprint (and kudos to whoever came up with the idea of returning the great Eric Ambler to public attention).

But hey, BL, if you’d care to stock some titles that can relate to the show, I’ve a suggestion or three for you.

Victorian Entertainments: There Will Be Fun, Entrance Hall, The British Library, until Sunday, 12th February 2017