Last week’s post on the cancellation of the BBC’s Ripper Street sparked a surge in blog traffic, retweets, and general indications of agreement. It seems I’m not alone in my view that the BBC is letting down its subscribers by running its programming in imitation of an ad-funded broadcaster. This Den of Geek piece is saying much the same thing, and I’m seeing the arguments repeated elsewhere. It’s not the usual spectacle of fans rallying to a doomed show; it’s a very British response to an open display of unfairness. Give all the good toys to the kids with the most toys, then watch as they break them.

I’m not of the opinion that only idiots watch those live contests and shiny-floor shows. All kinds of people watch them to unwind. But it’s not the only kind of thing they ever want to see.

This comes at a time when the BBC Trust has instructed Director General Tony Hall to “re-examine the creative culture in TV management and commissioning to consider how to achieve new peaks of distinctiveness across all services”. Does distinctiveness mean ratings? It would be a perverse interpretation to act as if it does. The subtext here is about quality, not numbers.

And sometimes it’s not about quality or numbers, but politics or prejudice. It’s attitudes that are at the heart of the ‘creative culture’ referred to by the Trust. Anyone who’s worked in TV for any length of time has their stories of politics or prejudice, real or imagined. Since we’re talking Victorian crime let me refer you back to the case of the BBC’s Murder Rooms, historical mysteries with production values to die for. Charles Edwards played the young Conan Doyle and Ian Richardson his mentor and model for Sherlock Holmes, Joseph Bell.  I wrote here of the against-the-odds process by which it was put together, and also the manner of its cancellation:

I was told some time after the event that this was most likely the outcome of a silent turf war between BBC Drama and BBC Films. The word went around that the show had been “too successful for the wrong department”. Co-producers The Television Company offered to take it over and finance it themselves, but were turned down.

There are rumours of a similar proposal for Ripper Street to be funded and carried by Amazon-owned download distributor Lovefilm, either pushing the BBC into a secondary market position or even eliminating the Corporation altogether. The mould was broken some time ago, when FX cancelled legal thriller Damages after three seasons, and satellite carrier DirecTV underwrote and broadcast two further series. Ripper Street is made by an independent production company, Tiger Aspect. I’ve no idea whether their deal allows them to sell it elsewhere, but an indie may not be so quick to turn down a lifeline.

While waiting to see how that pans out, you may care to consider this handsome pair as a stocking-filler for the fan of Victorian crime now pining away there in the corner. I’ve seen a surprise surge in the Amazon sales over the past few days, with new stock on the way. Don’t let that deter you from supporting your local bookshop, if you have one, and if they stock the titles. A third Becker book is well in hand, and there’s an upcoming story in Subterranean Magazine that picks up the chronology from the end of The Bedlam Detective. 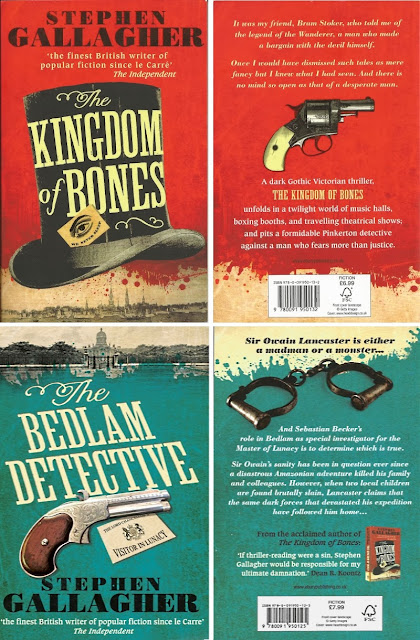 You Can Buy Them Here

And from our Colonial cousins, this handsome pair: 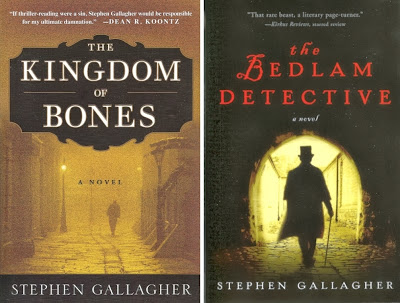 Buy Them Or Weep

Yep, in the end it’s always gonna be about me.