I’ve meant to do this ever since I saw a script in which a scene contained the unhelpful direction, “They fight”. And no more.

Film fights have a dramatic purpose. Gone are the days when personal violence was offered as the test and proof of a hero’s moral superiority.  Even in Fantasy, that’s a fantasy that no longer convinces. These days even Superman takes a beating and has to resort to ingenuity in order to prevail.

So for a screenwriter to write “They fight”, and then leave it to the director and stunt team to work out exactly how the conflict should play out to advance the drama, isn’t enough. But nor is it helpful to choreograph every blow and angle on the page. The idea is to provide a dramatic plan, the broad strokes of staging that will release your experts to concentrate on detail.

Here are the script pages and corresponding sequence of a swordplay scene from Crusoe, performed by Philip Winchester and Georgina Rylance. I’ll be the first to admit that I’m choosing this example because it went to plan and I’m happy with the way it turned out. 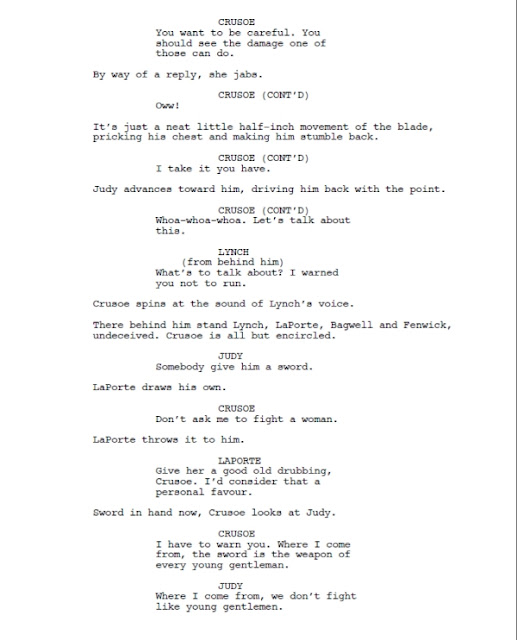 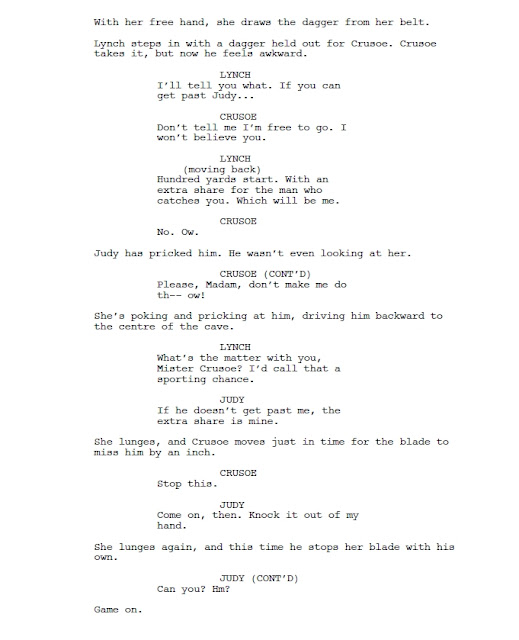 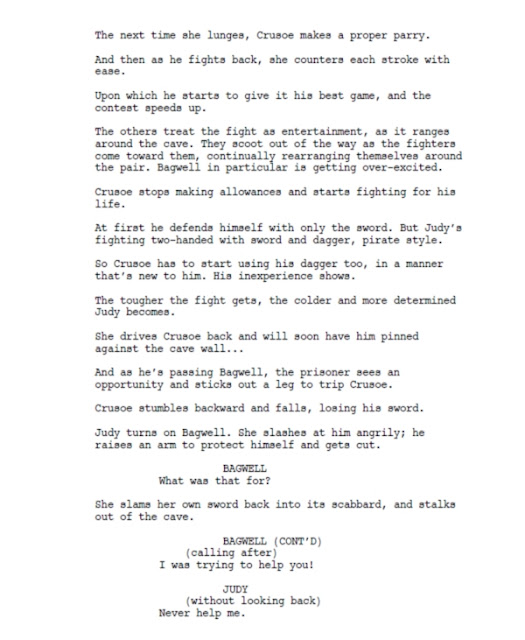 For me Georgina was one of the great ‘finds’ of the pilot; the part of Judy was cast only days before shooting and she nailed it with a strong, subtly off-centre and dangerous-feeling presence. Her showreel at georgina-rylance.com carries more Crusoe moments along with other work.

If you compare script to screen you’ll see some differences – the odd line tweak or cut, Lynch’s interjections to provide cutaways, bringing the daggers into the fight at a later stage – but you ought to get an idea of how the drama flows through the battle. Action in drama exists to show character, whether the crossed swords are real or verbal. Every incident is there to show us something. There’s a corresponding swordfight in the series finale that shows the change in Crusoe over the season’s arc; this episode’s naive Englishman becomes the seasoned islander, taking Judy’s lesson and turning it onto those who betrayed him.

There’s a version of the scene in better quality on YouTube – click here to see it – but it may be subject to region restrictions.