The WGA Strike and the UK Writer 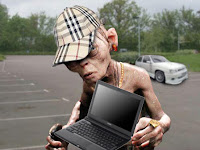 Thursday’s Variety carries this article suggesting that American producers have been scouting the UK media scene with a view to using the services of British screenwriters to supply them with material during the WGA strike.

Some people have interpreted this as a unique opportunity for a British writer to ‘break in’.

Others – like, people with half a brain and a sense of history – have noted what a CV-killer this could turn out to be.

You think it could be your entree to the US TV industry? Think again. The showrunners and staffers are all out there on the picket lines. Once the A-listers move back in you’d be the Gollum of the business, pelted with stones and driven off shrieking from any place where the work’s being done.

One British agent is quoted as saying, “I don’t know that any writer would want to be seen as a scab.”

To be honest, I’m not sure how substantial these rumours are. On a sheer practical level, no British writer could step in cold on an American project and immediately start delivering to specification. The writing of American drama is a highly structured and goal-oriented team procedure. It’s like A E Van Vogt’s spaceship factory – a complex facility that can spit out a completed starship every ninety seconds.

2 responses to “The WGA Strike and the UK Writer”